Over the last years in Greece, we usually talk about dishonesty and immorality in the field of politics. The majority of Greek people abdicate the responsibility from themselves and they put the blame only on the others.

Behavioral economics suggest that we should make a question to ourselves: Are we eventually as honest as we believe?

In the book “The honest truth about dishonesty”, Dan Ariely (Professor of Psychology at Duke University) describes the innovative findings of his research. By the time this book was published, every obsolete aspect about dishonesty was reconsidered.

In other words, you can’t have the penny and the bun.

Complex thinking is an amazing ability of the human brain. Thanks to this composing skill, we could deceive all the time, little by little, and still convince ourselves for our commendable behavior.

This balancing procedure is the process of rationalization, through which we rationalize a conduct that deviate from the widely accepted moral principles.

For instance, let’s say that you are a salesman. While having dinner with your friends at a luxurious restaurant, they ask you about a new product that they are going to launch in the market in a few months. After discussing with them about this issue, could this meal be regarded as a professional meeting and the bill will be charged to the expenses of the firm you are working for? I suppose it couldn’t. However, if anybody of your friends are a potential purchaser of your product? In that case, is it immoral to charge the company for this meal?

If these questions walk around your thoughts, then you are playing with the flexible limits of your irrationality and even without distorting your self-image. 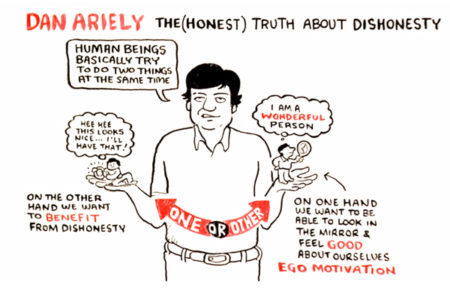 Yet, think how you would react, if you have known that you can hide a part of your income, without incurring consequences about that. An academic study at the University of Chicago has estimated evasion in Greece in 2009 to 28 billion €, comparing reported income and loan installments. This amount is only derived from income not declared by freelancers and self-employed. An overall estimation showed that an average percentage of 11,9% of the incomes in Greek economy are concealed and not taxed.

Undoubtedly, we could not say that all tax evaders are to some degree gangsters or assassins. They are everyday people who, through their cognitive flexibility and cost-benefit analysis, choose to reap some benefits without feeling any remorse.

Actually, in the opinion of Behavioral Economics, dishonesty is “contagious”. When watching other people around us deceiving in various fields of our everyday life, it is an unavoidable consequence to subconsciously perceive “cheating a little, as all other people do” as something that is not detrimental for the society.

How can we come to grips with our amorality?

We have to look at dishonesty from an honest viewpoint (irony), so as to realize that each and every one of us lies and is immoral to some extent. As Oscar Wilde said:

«Art -like morality- consists of drawing the line somewhere»

The difference lies in where does this aforementioned line is put. The key is to realize the amorality that is existent. Every one of us must contribute to the eradication of this phenomenon.

After reading this article, which is based on Behavioral Economics findings, how moral do you feel?

We are so interested in learning about your aspect of dishonesty and how you come to grips with these kinds of ambiguous situations!

Dan Ariely (2013) “The Honest Truth About Dishonesty: How We Lie to Everyone-Especially Ourselves.”